Home » Guest Posting » Age & Dating: What Is Your Datable Range?

Age & Dating: What Is Your Datable Range? 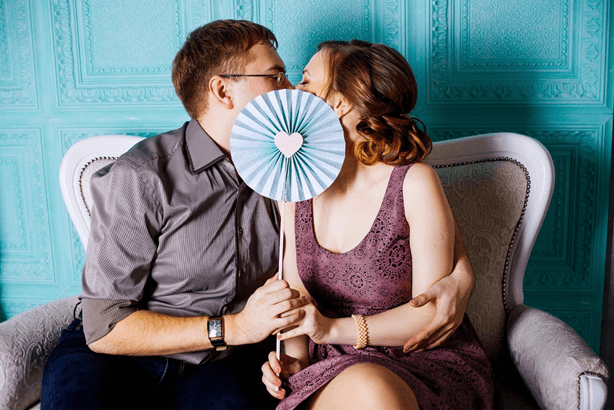 The long and short of it is, yes, age matters. Age not only matters, it factors heavily in most people’s dating “must have’s”. A recent Loveawake dating site study of online dating finds that a woman’s attractiveness peaks 32 years before a man’s does. Right up there with height (mostly for women) and appearance (both genders), age is a deciding factor for a lot of daters. This isn’t to say that there aren’t exceptions, but the majority of daters have what I call a “datable range”.

I was recently talking to a single friend of mine about our early 30’s dating woes and one of the things we discussed is that guys our age seem to want women younger than us, leaving us in this strange “datable range”. We both refuse to date anyone younger than 30 because we can’t imagine having enough in common with them. So much happens between your mid/late 20s and your 30s; self-realization, developing of career, maturing, etc. We’re not looking to deal with late 20s drama in our romantic lives.

Because of our reluctance to date younger we have found that we have we are willing to branch much older than we previously would have. In our late 20’s hooking up with a guy in his 40’s wasn’t an option, but now that’s within our datable range for sure. So, how do datable ranges evolve? How do we gauge maturity, stability, and desirable ages, as we get older?

I took to Facebook, Twitter, and Google+ to ask my followers and they didn’t let me down. They shared my status; I got more answers than I ever anticipated. After tabulating over 50 responses I had data that while not a scientific finding indicative of actual attraction, was still pretty great. 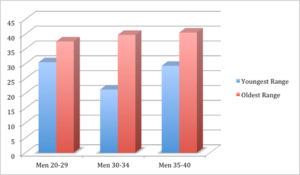 The average age of the men I surveyed was 34 and the average datable range for all the men was 23 to 40.

You can see, pretty clearly, that men in my “datable range” of 30-34 dip down, drastically from men in their 20s who would start dating at an average age of 30, to wanting to date women starting at (an average age of) 21. That’s not helping me get a date! In fact, despite the fact that the men get older their highest datable range only increases 2 years while their earliest datable age drops a little less than 9 years. That’s pretty ballsy, men.

The men I surveyed aren’t all bad. Men in their early 30s have the largest datable range of any age range of each gender. Men 30-34 would happily date women from ages 21 to 40. That leaves them plenty of women to date, now doesn’t it? I will still speculate that given a choice they would chose a woman on the lower end of that range as opposed to the higher.

The average age of the women I sampled was 34 and the average datable range for all the women was 29 to 45.

This is the same average age as the men sampled but their range is 6 years older on the lower end and 5 years older on the higher end. Women are clearly a lot more level headed. Look at that steady increase in our datable range as we get older. We don’t get older and suddenly start desiring fresh meat…nope. The largest gaps in acceptable ages was the 13 year age different of women in their 30s. Women ages 30-34 would date men 29-42 while women ages 35-40 would date 33-49 ½.

What does all this tell us?

Nothing I didn’t already know, really. Men like younger women and women realize that men mature with age and that we’re saving us a bit of trouble if we aim older. That or in our desperation as we age we’ll date just about anything. *sigh*Then again maybe it’s a GOOD THING that older men are into younger women since it seems pretty clear, from my small study, that we enjoy older men.

At a certain age (mine apparently) men with salt & pepper hair become sexy. They look distinguished, they are established in their life, they are stable, they appreciate the vibrancy of younger women, and their enthusiasm for us makes them irresistible.

What this most definitely confirms is that I never want to hear anyone saying that men don’t want to date them…until you turn 40 that is…which apparently is the expiration date on a woman’s datable status. Of course this isn’t actually true, I know plenty of women who met and married in their 40’s. This data is more a testament to the men in my social circles not being older than their 40’s themselves.

When push comes to shove people may have age preferences but we all have somebody we’d make an exception for, right? I know I do. Hello, Alex Pettyfer and Denzel Washington. Anyway, the fact remains that age is a factor when dating but it’s not the be all end all. Get out there and date, and stay open minded because as the saying goes “love knows no age”.